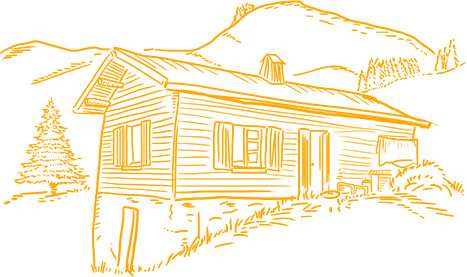 The origins of Reblochon date back to the 13th century, in the Alpine pastures of the Thônes valley, where it all started through acts of secret pilfering!

At the time, land owners – often monks or nobles – exercised a “droit d’ociège” right over farmers who farmed the mountain pastures. This usage fee was collected once a year, and was based on the number of pots of milk produced by the herd in a day. The quantity of butter and cheese that could be produced from it was deducted from it. 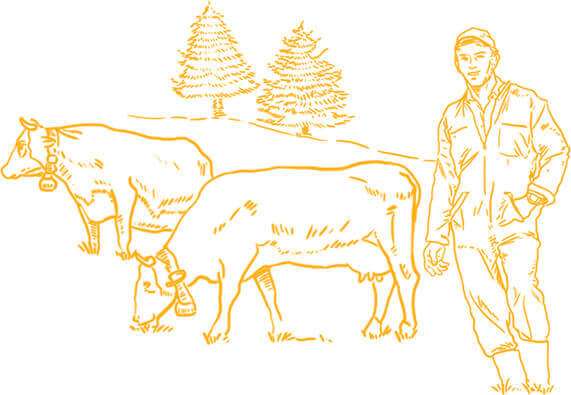 The latter had to pay a tax to the landowner according to the quantity of milk produced per day.

On the day that quantities were checked, the farmer cleverly only did a partial milking in order to pay less.

As soon as the inspector left, they did a second milking. There was hardly a great quantity of milk left, but it was very rich in cream, ideal for making cheese.

Reblochon therefore owes its name to this minor deceit, locally called “la Rebloche” in a patois dialect, with “Re-blocher” in French meaning to pinch the cow’s udder a second time.

At the beginning of the 20th century, less than 40 tons of Reblochon were produced per year. The development of railways, tourism and winter sports rapidly increased Reblochon's fame across France.

In 1958, Reblochon producers were amongst the first to obtain the Protected Designation of Origin label that protects the production area and recognises the connection between the lands to Reblochon’s origins.

We use cookies on our website to give you the most relevant experience by remembering your preferences and repeat visits. By clicking “Accept All”, you consent to the use of ALL the cookies. However, you may visit "Cookie Settings" to provide a controlled consent.
Cookie SettingsAccept AllReject All
Manage consent

This website uses cookies to improve your experience while you navigate through the website. Out of these, the cookies that are categorized as necessary are stored on your browser as they are essential for the working of basic functionalities of the website. We also use third-party cookies that help us analyze and understand how you use this website. These cookies will be stored in your browser only with your consent. You also have the option to opt-out of these cookies. But opting out of some of these cookies may affect your browsing experience.
Necessary Always Enabled
Necessary cookies are absolutely essential for the website to function properly. These cookies ensure basic functionalities and security features of the website, anonymously.
Analytics
Analytical cookies are used to understand how visitors interact with the website. These cookies help provide information on metrics the number of visitors, bounce rate, traffic source, etc.
SAVE & ACCEPT